A few years ago, on some lazy Saturday afternoon, I came across a film called Bonjour Tristesse, 1958 (French, "Hello Sadness."  Novel by Francoise Sagan, 1954) starring Debora Kerr, David Niven and, this pretty little actress I didn't know, Jean Seberg.  It is a rather artsy film about a flimsy, do nothing, father-daughter duo with plenty of money and no drive.   Their lives consist of laying in the sun, and dancing the night away with their latest conquests.  The realization of their pointless existence is not the tragedy; the real catastrophe exists in their inability to change their own pattern of living.
It is the kind of film that never leaves you once you see it.
Jean Seberg is not a noted actress, yet her beauty seems to be enough in her roles.  American critics gave her very poor reviews (including this second attempt, Bonjour Tristesse) but when she moved to France and began making foreign films, the press there loved her and she had a fairly successful career for awhile.
It is odd to think that this beauty, who is the picture of gamine European style, was actually from Marshaltown, Iowa!  She still inspires all of us today with her minimalist, summery, devil- may- care look. 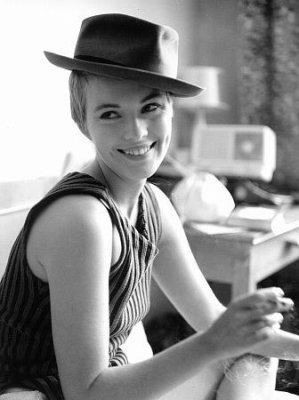 callmeredtelephone
I am already dreaming of summer with Seberg as my style inspiration.  Here are some things I found that I am going to need.

Pin It
Posted by Rebecca and Lori at 7:14 AM