So a few days ago I posted about my Black Friday score at Anthropologie.  I was super excited, because apart from getting some gifts crossed off my list, I got a really cute pair of boots at a really great price. 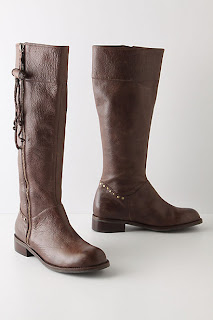 Unfortunately, when I checked my email about a week ago, I received several emails from Anthropologie, each one telling me of another item that I had bought (at the very beginning of the sale) that I wouldn't be getting.  First it was a smaller item (a gift); ok, no big deal.  Then it was another item, a gift for someone on my list.  Annoying, but replaceable.  Then another gift.  Then, in the last email, my boots.  My boots would not be coming, but what's this?  Yet another email?  This time an apology and a coupon for 25% off my next order to make up for the inconvenience.  The inconvenience of thinking I had nabbed a pair of boots for over $200 less than the original asking price.  So while 25% is a nice gesture, it didn't quite soothe the sting.  I was waiting for what would now be a rather small package from Anthropologie when this showed up. 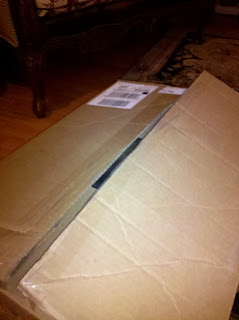 Woo hoo!  Look at the size of that box!  That, I thought, admiring it on the porch, is a boot box sized package!  Maybe some little elf at Anthropologie found an extra pair of boots and sent them to me since I undoubtedly ordered them first, ahead of anyone else who shopped on the internet at 3 a.m. Friday morning.    I opened up the box to find this.

A very large amount of air filled bags, two tiny little cardboard boxes, and a package of cards that I had ordered for Alli.  No boots.  I think that elf at Anthropologie is mean spirited; why else would they want to rub salt on the wound?!  I thought I had been pretty good this year, so I'm not sure where this bad boot karma is coming from.  My fingers are kind of crossed that somehow I'll get my boots.  At least today another one of the items I ordered that were placed on back order arrived.  I guess that is probably better, anyway.  It's better to give than to receive, right?
Pin It
Posted by Rebecca and Lori at 7:16 AM