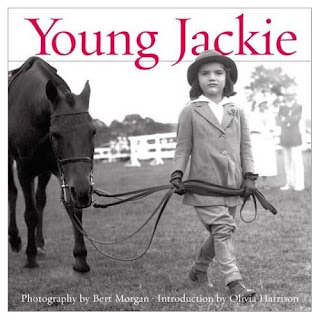 Jackie O.
I bought a book entitled Young Jackie for my little niece of the same name.  I flipped through the book and it is full of beautiful pictures of Jacqueline Bouvier Kennedy Onassis taken throughout her childhood by famed photographer Bert Morgan.  There is a little bit of biographical information included between the pages of beautiful black and white pictures, most of which depict a young Jackie on horseback.
I love the idea of my little Jackie having a role model such as Jackie O to look up to; and how cool is it to have a role model with the same name?!  Of course, that's not reason enough for a little girl to look up to someone, but Mrs. Jacqueline Kennedy Onassis definitely fits all of what should be the criteria for a young lady to aspire towards.  She was not only a fashion icon, she was also a contributor to the arts and she was a truly graceful, cultured woman.  In her later years, she returned to her love of literature and became an editor.

Upon graduating from college with a degree in French literature, she and her sister, who had graduated from high school at the same time, took a trip to Europe together.  They documented their journey in the autobiographical One Special Summer.
The book contains drawings, poems, letters and musings by both sisters.  I found a first edition copy on ebay, but you can find copies at online retailers.  It is an interesting read, and something that would be fun to do for your own travels.  Thanks to sites like snapfish, it is easier than ever to put together your own little book to document your travels.
Of course one could argue that Jackie O is most remembered for her iconic style throughout her White House years and beyond. The following images certainly help make that point!