Can you believe that Halloween is one week away?  I can't.  We have not gotten our costumes yet, or even decided how we are going to dress.  To tell you the truth, we haven't really decorated yet, either.  We did a little bit; the Cat gave David a bat purse to hold. 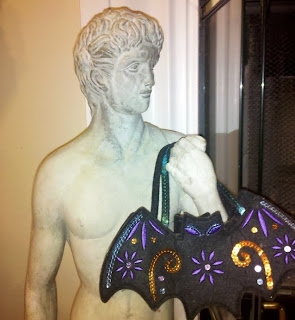 And I put up a bloody-eyed mermaid the Cat made when she was little (don't ask!) and a couple of Halloween themed books on the mantle.  But other than that, I've been a bad, bad blogger, not even embracing the holiday and all the post worthy stories and pictures that could come out of it.  What can I say?  I've been super busy.  And I'm lazy.  There is that.

Anyhoo.  In class yesterday, my 5th graders and I were learning about verb tenses, and one of the sentences mentioned "Gothic" stories.  The kids all thought it was referring to some angst-ridden, black clad teenager with pale makeup and a penchant for black nail polish.  I had to set them straight.  I told them about Poe.  I'm sad to say that a lot of the kids had never heard of Poe!  This breaks my poor little English major heart.


So we took a couple of minutes at the end of the period and I shared Annabel Lee with them.  I chose this particular poem because it is macabre, but not overly macabre, and because I figured most of them had heard it or read part of it without ever having realized it, thanks to the book/movie Holes.  (That is a great kid's book and it is a great movie!)

Here's an easier font (in case you are having a bit of trouble reading Poe's hand!):

Such a sad (but creepy!) poem, no?  I like to point out to my students that one of two things could be going on here... the narrator is so obsessed/depressed over the loss of his love that he goes down to her tomb and spends the night lying next to her coffin, OR he is speaking from beyond the grave, having already died (broken heart? Suicide?) and been placed in a coffin next to his wife.

Either way, Poe is a great author to revisit or become acquainted with during the days leading up to Halloween!


And here is a great find... Darth Vader (aka James Earl Jones) reading The Raven.

I'd better get busy decorating; there isn't much time left!  In the meantime, you can check out Rebecca's Halloween mantle here in case you missed it.

Pin It
Posted by Rebecca and Lori at 6:37 AM