While shopping for my nephew's Christmas present (a Lego Darth Vader alarm clock), Alli and I found a new book that we both wanted: 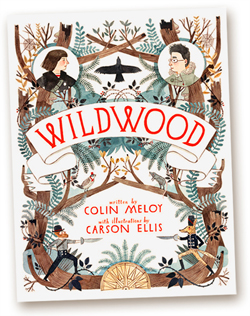 I first picked it up because I loved the look of it.  (There I go again, judging books by their covers!)  I read the back of the book and was intrigued.  Then Alli wandered over and picked up a copy of the same book, probably for the same reason.  We decided that we needed to buy ourselves a little early Christmas present.
The book is a collaboration between the Decemberists front man Colin Meloy and illustrator Carson Ellis.

The story takes place in Forest Park, which is 5,000 real acres of forest just outside of Portland, Oregon.  The real world is mixed up with a fantastical one.  There's a murder of crows who kidnap a little boy.  I like that now kids will know that a bunch of crows is called a murder.  There's a journey into the "Impassable Wilderness" to find the little boy.  I'm hoping it is as good as it looks.  And why shouldn't it be?  The Decemberists are known for songs that tell stories, with a lot of their music based on events from history and on folklore, like the Irish tale Táin Bó Cúailnge.

If you can tell the story of the Cattle Raid of Cooley (that's the epic Irish tale from the Tain) in a song (granted, it is a long song), then think about how involved the novel should be!  I'll let you know how it turns out!

Pin It
Posted by Rebecca and Lori at 8:24 AM