At 3, my daughter is like many little girls: she likes to dress up and pretend to be her favorite characters in movies such as Sleeping Beauty, Tangled, Tinkerbell and Beauty and the Beast.  One exception to the princess generality is that my little girl typically likes to pretend to be the villain or the male lead.  For Christmas this year I wanted my husband to build her this little box/wardrobe to store all of her dress-up things, instead of having them crumpled up in a toy box.  I thought I would snatch up some good deals after Halloween to pre-stock her gift.  I assumed that because she liked princess movies, she would like princess dresses.  Gwenna cleared that up when she asked her Grandma if she could make her a Maleficent (from Sleeping Beauty) cape and head-dress.   She also asked Santa to bring her a "cruncher."  I was mystified by her request until I realized that she meant the staff that Maleficent uses.  One of her favorite scenes is when Maleficent electrocutes her little minions.  What can I say?  She is an odd little thing, and I love her.  I kept the princess dresses, though, because who knows...she may go through that phase, even though I don't care if she ever does. 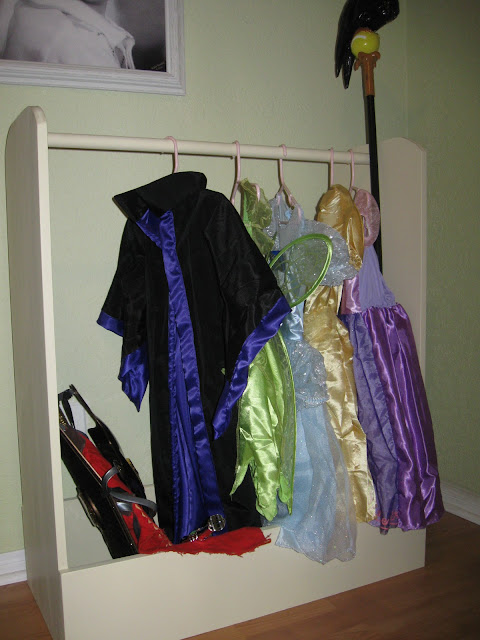 I will post some pictures of Gwenna in her Maleficent costume as soon as the head-dress is completed!

Pin It
Posted by Rebecca and Lori at 1:49 PM