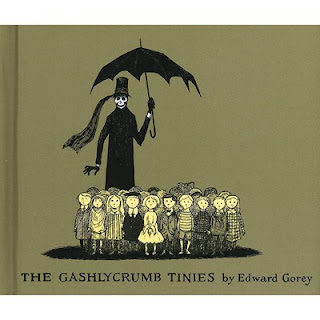 Okay.  This blog is getting me into a little bit of trouble.  Several times now when I have sat down to write about a particular subject, after a little bit of research, I have found that there is a new book I need to have.  Not just to read.   To have.  I don't have a Nook or a Kindle, though just about everyone else in my family does (and from what I've heard they all love them).  I know I would love one too, if I were to ever get one (no, that is not a hint), but I really do adore books.  Book-books, that I can hold and feel and look at and gaze upon.  And this blog, and the posts that I have decided to write, inevitably leads me to another book that I never knew existed that I now have to have.  Case in point, I sat down to write about Edward Gorey.  I love Edward Gorey and his macabre, dark sense of humor.  I love his Victorian inspired sketches.  I love The Gashlycrumb Tinies, and the fact that it is an abecedarian book.  I love the word abecedarian, and that abecedarian is actually a word to describe an ABC book.  So in case you have never heard of The Gashlycrumb Tinies, let me give you a brief synopsis.  It is a rhyming alphabet book that introduces a new child for every letter of the alphabet.  The simple little rhymes introduce the child and how they met their demise.  It isn't completely dark and disturbing, though, and it isn't meant to be; instead, Gorey seems to be poking fun at the ways in which parents sometimes overreact to situations: "K is for Kate who was struck with an axe/ L is for Leo who swallowed some tacks."  Neither of those things are very likely to happen.

So anyway, as I was reading up on Edward Gorey and looking at the EdwardGoreyHouse museum website, I found this:

It is a book of letters between Gorey and Peter F. Neumeyer, author of Donald and the... .  Neumeyer was meeting with Edward Gorey to hire him to illustrate his book when he dislocated Gorey's shoulder.  Apparently, Gorey was about to fall and Neumeyer grabbed onto his arm, resulting in the injury.  The two hit it off while waiting in the hospital for Gorey to receive treatment, and thus began this long and letter filled friendship.  The book sounds so endearing and creative and lovely, and I can't wait to read it. 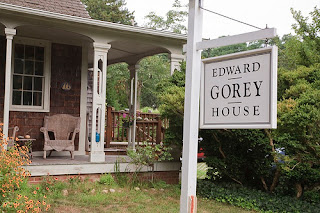 ~Lori
Pin It
Posted by Rebecca and Lori at 1:49 PM