Phantom of the Opera

I recorded a documentary on the original London production of Andrew Lloyd Webber's Phantom of the Opera a little while back, and just got around to watching it.  It is an interesting behind the scenes look at one of the most popular Broadway shows of all time, with interviews from the original cast and crew.  Phantom was the first real Broadway show that I had ever seen; I was probably 18 or 19 years old, and I went with  my friend Josh and a couple of his friends.  We got all dressed up (Josh even brought me red roses), drove down to the Pantages theater in L.A., and had dinner at some Chinese restaurant before the show.  I remember the feeling I got when the lights went down and the show started.  It was breathtaking; I was hooked.  The show was amazing; I especially loved the scene where the Phantom takes Christine across the stage on a boat.  This is one of the things I love about theater; this is just a simple little boat on wheels rolling across a stage that has a fog machine running, and there are some strategically placed candles, but from the audience it really looks like the boat is on water.  It is easy to believe that they are really in his underground lair beneath the opera house.  It is also easy to sympathize with the Phantom, and I think a lot of audience members (probably mostly women), walk away from the show on his side. 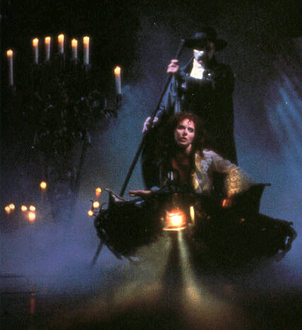 The behind the scenes gossip in the documentary is crazy; there were so many hitches and glitches with the practice runs leading up to the opening that everyone involved thought that the show would tank.  For a little while there was even a rumor that the show had evoked a real phantom in the theater, there were that many things that went wrong.  Thanks to the dedication of the cast and crew, the first show after the previews, which was attended by a number of celebrities and even Princess Diana, was perfect.  Also, considering Sarah Brightman's popularity now (she was the original Christine in the play, and married to Andrew Lloyd Webber at the time), it's interesting to think that at this point in her career, many critics were quick to say that she was not that talented and had only gotten the part because of her marriage to Webber.  Regardless of what critics thought, the audience accepted her then and now.
Alli and I got to go see Phantom (her first time) while we were in London.  It has been playing at Her Majesty's Theater since 1986, even through renovations of the theater in 1992.  It was even more magical the second time, and watching this documentary is making me want to go see it again.  Preferably in London.