I have jumped on a bandwagon recently.  It is called the Sock Bun bandwagon.  By me.  I'm the only one that calls it that.  I first saw some pictures of the sock bun on pinterest (you need to go check pinterest out if you haven't already.  We have a "pin it" button to the right if you are interested in pinning anything you see on here.  We are so  convenient and helpful that way, I know).  I loved the way the sock bun looked, but some of the pictures, even the step by step ones, seemed a little confusing.  I found an awesome tutorial on youtube though, and it cleared things right up.  I went home after watching that video and proceeded to master the sock bun.
Are you ooohing and ahhing yet?  I was when I first saw the sock bun.  I really like saying sock bun.  Sock bun!  It just rolls off the tongue.  Anyway.  Here is another pic of a sock bun, in case I have not yet convinced you of their awesomeness.
Look how huge and perfect it is!  What is the big deal, you ask?  Who cares, you say?  Or are you asking HOW do I get my hair into such a cool looking bun?!  Well, let me tell you.  The secret to a sock bun is a sock!  Yes, shocking, I know.  I suggest using a clean sock.  One that matches your hair color as closely as possible.  Cut the toe off the sock (do this while you are NOT wearing the sock).  Roll the sock.  Put your hair in a ponytail.  Pull the sock to the end, and tuck and roll.  Really, it is easier than it sounds, and I am including the fantastic youtube tutorial I mentioned earlier.
It is super simple, and it looks so polished in a really short amount of time.  The bonus of the sock bun is that if you spritz it with water and dampen it, and put it up really high on your head and then sleep in it (obviously this would be at night and not when you are supposed to be working during the day), then when you wake up, you will have sock bun curls. 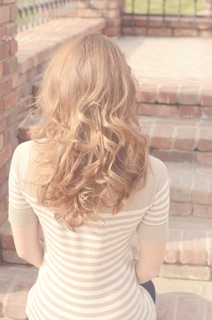 Not too bad for sleeping with a sock in my hair for a night.  The beauty of this hair style is that it really is pretty simple to do, and it can be done on thin hair too- just use a trouser sock or a little kid sock instead.  I did that with my little niece's hair, because her hair is pretty thin.